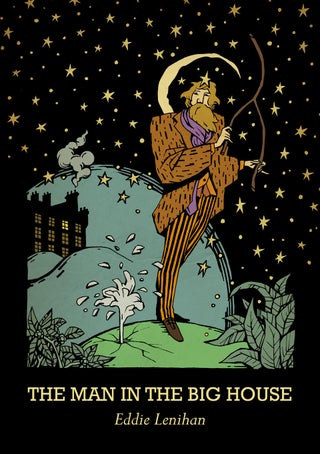 The Man in the Big House

Of all the thousands of patients who passed through Ennis psychiatric institution in its years of operation (1868 - 2002) under its various names perhaps only one, Jimmy Armstrong, had the opportunity to tell his life's story personally in book form.

He was a most remarkable man in that he had an appreciation for small things, details that most people either miss or dismiss. Every road, field, lake hill in his locality, and the stories attached to them, he knew them all in a manner that is almost unimaginable nowadays.

Cruelty he hated, to animals and people alike, and he was known for his manual skill, especially as a repairer of clocks and bicycles when such was sorely needed - during the "Emergency" in particular.

But it was as a teller of stories of all kinds - historical and contemporary, humorous and serious, long and short - that he excelled, and here his astonishing memory was his greatest asset. A selection of them is included in this book.

Truly, he was a man for all seasons and his death in 1987 deprived Ennis, his native Quin and far beyond of one of their unique talents, though it is doubtful if that fact was much recognized at the time. 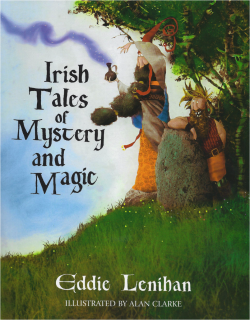 Irish Tales of Mystery and Magic

A stunningly illustrated compilation by seanchai Eddie Lenihan, which will charm, entertain and amuse children of all ages.

From the story of Fionn McCumhaill's bunions, to the Fianna's concern over their rotting teeth, these stories tell of the adventures and bravery of the ancient Irish heroes in the face of scary and spooky challenges. 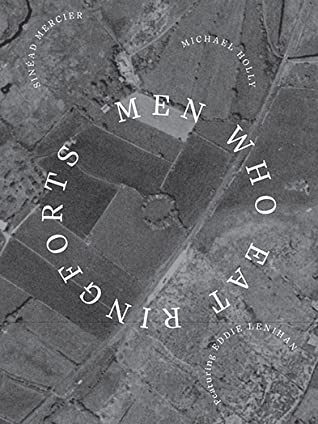 Ringforts are Ireland’s most common archaeological monument, liberally spread throughout the countryside. Seen as circular enclosures in the rural landscape and many existent for hundreds and thousands of years, they are often overgrown with trees and bushes, forming an unassuming yet encompassing presence, one grown from habitation, lived life and ritual.

With increasing regularity, the Irish state has sanctioned the destruction of ringforts as part of motorway schemes and infrastructural development. How can we understand a nation hell-bent on the demolition of its own history for the expedient delivery of perceived notions of progress? And what forms of resistance should be formulated to counteract the barbarism of these tendencies? 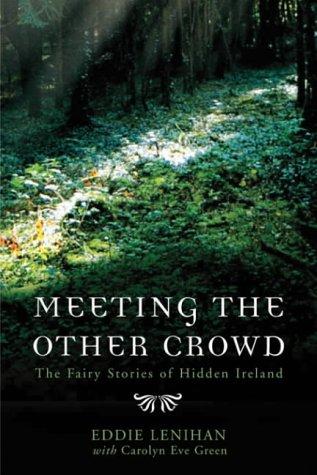 Meeting the Other Crowd

€15.00
Add to Cart
´The Other Crowd’, ’The Good People’, ’The Wee Folk’ and ’Them’ are a few of the names given to the fairies by people in Ireland. Honoured for their gifts and feared for their wrath, the fairies remind us to respect both the world we live in and forces we cannot see.

In Meeting the Other Crowd, Eddie Lenihan presents a book about a hidden Ireland, a land of mysterious taboos, dangers, other worldly abductions, enchantments and much more. It is a world which most Irish people acknowledge exists, but which few of them, except the very oldest or professional folklorists, know much more about.

Eddie Lenihan opens our eyes to this invisible world with the passion and bluntness of a great storyteller. In doing so he provides one of the finest collections of Irish folklore in modern times. 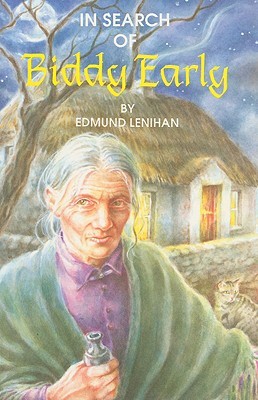 In Search of Biddy Early

€12.00
Add to Cart
It seems certain that as long as Biddy Early is remembered mystery and argument will surround her name.

She was a remarkable woman who possessed extraordinary powers and natural gifts of knowing the unknown.

The very mention of Biddy Earlys name in any part of Ireland, especially in County Clare, releases an astonishing amount of stories about her cures, her magic bottle, her gift of prophecy and her many other curious talents. 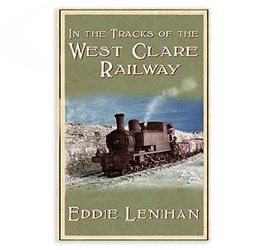 In the Tracks of the West Clare Railway

€15.00
Add to Cart
Although trains are unlikely to ever again run between Ennis and Kilkee, the legend of this little branch line of the southern railway system will live on as long as there are people who look back fondly on the past.

Anyone with even a superficial acquaintance with Clare will know what a wealth of varied scenery it contains, together with abundant archaeological sites and historical remains spanning over 5,000 years of human habitation. Not least of these are the earthworks of the West and South Clare Railways.

Eddie Lenihan believes that a time will come when parts of these lines will be preserved as national monuments, but until that happens their destruction will continue. For what was a railway is now a disjointed succession of pieces linking not just places but in a way two worlds: one unhurried and traditional, the other brash, frenzied and modern.

In the Tracks of the West Clare Railway paints an evocative picture of a time when the railway breathed life into West Clare. 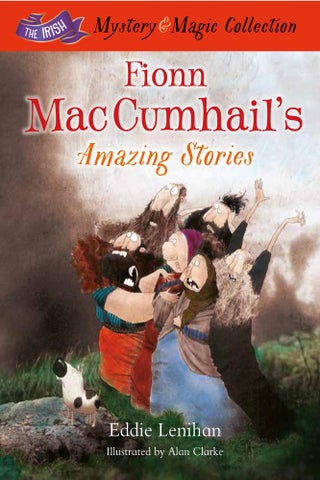 At last Eddie Lenihan’s new Fionn MacCumhaill adventure stories for young readers are now available in bookshops and directly from the author. Hardback, beautifully, humorously illustrated throughout, Fionn Mac Cumhail's Amazing Stories will make an ideal gift for any occasion, special or ordinary. Even adults will not be able to resist a smile at some of the illustrations by internationally-renowned artist Alan Clarke. 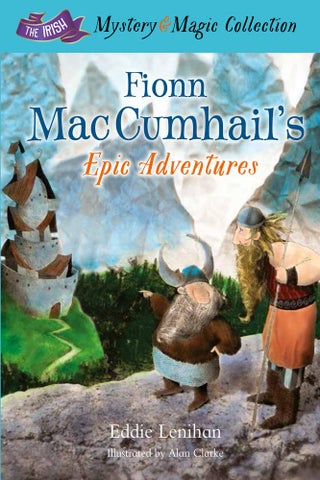 At last Eddie Lenihan’s new Fionn MacCumhaill adventure stories for young readers are now available in bookshops and directly from the author. Hardback, beautifully, humorously illustrated throughout, Fionn MacCumhail's Epic Adventures will make an ideal gift for any occasion, special or ordinary. Even adults will not be able to resist a smile at some of the illustrations by internationally-renowned artist Alan Clarke. 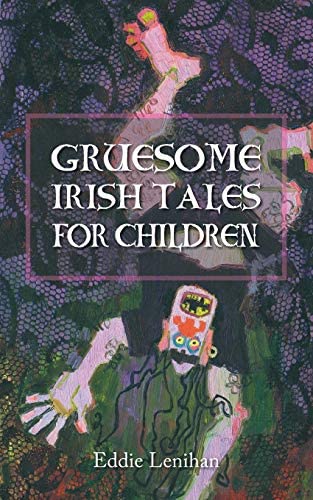 €12.00
Add to Cart
Two terrifying tales about the darkness, fear and terror in the lives of Fionn MacCumhaill and Cúchulainn. These stories tell of the adventures and bravery of the ancient Irish heroes in the face of scary and spooky ordeals and challenges. 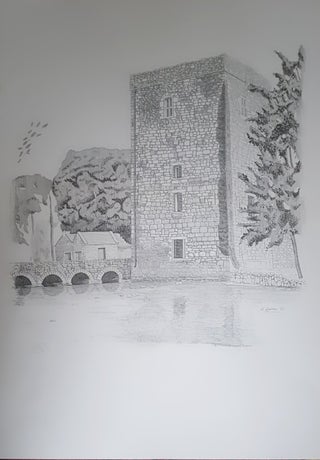 Originally drawn in 1991 by my brother Michael, this pen and ink portrait of Thoor Ballylee in Co. Galway (Yeats tower) has always been my favourite drawing and now I would like to share it with my fellow Irish heritage enthusiasts.

All copies autographed by Eddie. 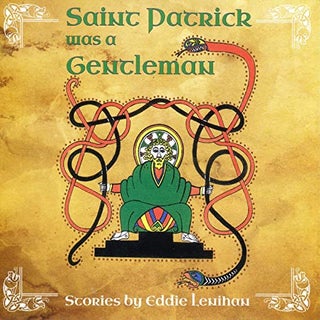 Saint Patrick was a Gentleman

€15.00
Add to Cart
This is now available on CD for the first time. Eddie has been described as "Ireland's Greatest Living Storyteller" 'Eddie's stories are not for the faint-hearted, but then good stories never are.' RTE Guide

€20.00
Add to Cart
Vol 1: Eddie Lenihan turns for the first time away from his own stories and back to the traditional tales on which his own were based. However, while the stories are from the telling of others, they are not mere slavish reproductions. Each one, while staying with the traditional format, is invested with Lenihan?s native wit, and is told in a warm and original way. Vol 2: Six traditional stories form Clare and the Aran Islands, told by a master storyteller. Some are specifically Irish, while others have analogous versions in many countries. All of them are told sincerely, with wit and humour.

€20.00
Add to Cart
Edmund Lenihan, a Kerryman living in Clare, is a folklorist and a schoolteacher. Having listened to a large number of traditional storytellers he began to tell traditional stories himself. He achieved a reputation and a programme on the television, and then set about recording stories. This is a double CD re-issue of two stories that were previously only available on cassette. However, these are not traditional tales - Edmund has taken characters and situations from the tradition and cleverly composed his own stories around them. Perfect for children.

€15.00
Add to Cart
The six women whose stories are recounted here are ‘terrible’ in the sense that, rightly or wrongly, many people were terrified of them. Whether they were good or bad in a moral sense I leave to those qualified to decide - or better still, to the individual listener!

What is certain is that they were all remarkable in their own way and have been, accordingly, remembered down the generations.